When cooking becomes more than just a survival routine and food is transformed into transient works of art, it seems only right that the utmost attention be paid to every detail of a meal. Roig Robí, one of Barcelona’s better known restaurants, has printed its new menu on a fine reproduction of one of Catalan artist, Antoni Tàpies’ prints.

This highly artistic menu, on which the lines of the print “Fulla remolí”, leaf blowing in the wind, are the background for an array of mouth-watering propositions, was presented at a dinner last Tuesday at the restaurant in Barcelona’s calle Séneca. The guest of honour was the artist himself and the dinner was hosted by the restaurant’s owner, Mercè Navarro. The original print of “Fulla remolí” signed by the artist, hangs on one of the restaurant walls.

There were no speeches, but guests enjoyed relaxed conversation whilst one exquisite culinary masterpiece after another was placed before them, the dishes ranging from the sublimely simple “pan con tomate” (Catalan tomato bread) or Burgos lamb to the designer creation foie with morels or the “Onal” brush-stroke with its triple chocolate experience. Tàpies expressed his delight with the food, saying that it showed how amazing creations can also be produced in the kitchen, and his satisfaction that an idea Mercè Navarro has long been toying with – to have a menu that is not only rich in ideas, but also beautiful to look at – had finally come to fruition. The menu itself is tempting, as became evident when some French customers asked for one to take home and the artist even autographed it for them. It wouldn’t be surprising if this highly original Tàpies, far more accessible than the real thing, were passed around a bit and if people are not too careful, ended up on the main wall of more than one gallery. 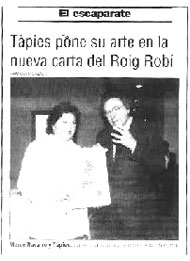