I’m turning 73. I was born in Olesa de Montserrat and I live in Barcelona. I’m divorced, I have 6 children and 7 grandchildren. I did not study, I pertain to that generation of women who were prepared to be good house wives. Equality and tolerance is my creed. I’m left-wing. I was a practicing catholic. Today I believe more in people than in that which I can not see.

-From whom did you learn to cook?
From my parents. It was a simple home, but we still ate green beans al dente. Before opening the grocery store they worked in textile factories, so they divided between themselves the house-work and attention that I needed.

-That was not very common during that period.
No, and I believe that that balance has served me for the rest of my life.

-When did you discover that life is complicated?
Very quickly. When I was seven years old, two of my brothers died within a very short amount of time- one just after being born, and the other when he was four. It was very painful. I was converted into a sad and reflexive girl.

-And what about your adolescence?
In the 50’s my parents decided to move to Barcelona so that their children- for at that moment two more had been born, and another would arrive- would have more opportunities, and we did. For my parent and for me, as we worked in order to promote them, it was difficult to adapt and it was difficult for us to move forward.

-When did you leave home?
I fell in love very young, but those were years of hope: hope that everything would change, we wanted to change the regime, society. We also wanted to set ourselves up in order to be married…we wanted to have many children.

-And you had them.
Six. Those were years of hope and happiness until something went wrong. I was greatly disappointed and decided to get divorced, I was about 40. I felt very little prepared to support the family, but whenever I’ve had difficulties, I’ve grown.

-Your ex husband didn’t take financial responsibility for your children?
I didn’t fight for that. When I thought that he didn’t love me anymore, I only wanted him to leave.

-And you never lived with anyone again?
I told myself that I would never live with anyone again, if loving so much and having dedicated so many years had turned out so badly for me, repeating it was impossible: to love that much again, to be so dependent on someone again.

-What is your conclusion about love?
I admire couples that arrive to old age loving each other, because it is very difficult.

-How did you support six children?
-I worked at some friends’ real estate agency, looking for investors, and when I was able to save a little I opened the restaurant. I knew how to cook, but not what a restaurant was. I thought that I would do it as if there were friends coming over to my house.

-And did it work?
The truth is yes. I believe that in order to have a good restaurant you have to think that you are cooking for someone you love very much. One must cook with a lot of love.

-Even so it must not be easy.
I began with much less money than was necessary, so I had to put a lot of effort, and that helped me because I concentrated in doing it well. At the beginning we were all women, some worked half of the day and others at night, in way that they were able to take care of their homes.

-A pioneer.
A pity, because with time those double salaries became unthinkable for me. But that kitchen of women was delicious, there was hope, understanding and enthusiasm.

-And how did you do it with six children?
I worked day and night. It was difficult.

-What has been difficult in life?
I am always happy with what I do, I put much interest in living each day, in enjoying what I’m doing, that I’m well. When I was 15 I would say that that was the best age, and at 30 too, and at 50; and now I say it as well.

-It almost makes me envious.
It hasn’t been easy, I’ve renounced many things, but it hasn’t been too difficult because I’ve done it willingly, and that takes away much of the hardness of life. For me, opening the restaurant doors and having people come in, without having to search for them, for me it is beautiful. We could say that knowing that life is difficult make is less so.

-But you haven’t conformed.
No, I’ve forged my life, I opened a path without bitterness. It has always give me the sensation that I was in front of a cart that I had to pull, but it has been pleasant to do. And I’ve had many compensations.

– How so?
I have a good time reading, learning is a pleasure for me and I like to surround myself with people better than me, precisely to understand them. But when I was a house wife and instead of reading I had to make clothing for my children, I also had a good time, I didn’t question life, I lived it.

-You haven’t felt alone?
I have excellent long-haul friends, six marvelous children that have been what has interested me most in my life, and seven grandchildren what fill me with happiness.

-What are the greatest lessons that life has given you?
To understand others, to learn how to listen. I have discovered that making the people that you love happy can be happy in itself. And I believe that it’s important to live in the present, the past serves only as a reference, and that which has yet to come, you will meet it later.

-What do you want for your grandchildren?
– I would like for my grandchildren, and all the grandchildren of the world to find a more just and equal world, and for them to be able to enjoy the beauty of our planet in peace.

Today is Mercè’s day. A good day to celebrate Gaudí and all those who made the Palau de Música and the Liceu possible… and to not forget that having many fast food restaurants does not make us more cosmopolitan. But above all, it is the day of all those anonymous people: post war people, the young who had to live in a depressed and repressive country, a country in black and white. Honored people that didn’t study masters, but with tenacity and hope gave birth to this city; with its restaurants, its businesses, its dance rooms, its theaters. Welcoming, tolerant people with values. Congratulations and thank you. Mercè Navarro is one of them. Her restaurant is turning 25 years old. The story of the Roig Robí was a necessary dream, and her story a love lesson. 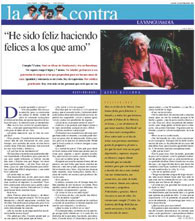