A HAVEN OF GOOD FOOD
Robí Roig is at the phase where great restaurants come from.

In his book “Art against aesthetics” Tapies says that the artist must always be on the search for new mechanisms that overcome the normal wear and tear of artistic expression, and it must be situated according to the changes of the spirit of each era. And in turn, the Chinese, who are very wise, write that in order for there to be changes or mutations, there must be immutable things, values that must be maintained. These are the ideas that are reflected in the paintings that hang on the warmly colored walls of the Robí Roig, gladly devised by Josep Crosas, and also on the menu cover with a suggestive painting that Tápies dedicated to Mercé Navarro, the soul and body of this comfortable restaurant.

Mercé bought a battered shop that with hope and courage she proposed to convert into a restaurant. She (who from childhood had enjoyed the dishes that her father prepared, her vegetables lightly cooked, fats avoided, and measured cooking points) became the protagonist of a new story. And that story began in 1982, when the family converged with the ideas of the new cuisine created in the late 60 by Bocuse, Girardet and others, Arzak, Subijana and the Basque, who joined the bandwagon in 1976 and conquered the peninsula in no time at all.

Then the Roig Robí appeared, and at that time became the most attractive, fashionable cuisine in Barcelona on these principles: cooking with love based on good product, family and friendly business, and modern methods of presenting and cooking the dishes. Thus emerged the vegetable puddings of the time, “esqueixada” with the texture of tomatoes, rice pie with “espardenyes”, hake with “samfaina”, monkfish with caramelized onions, the pork with squid and almond sauce, tenderloin in a puff pastry, and other dishes of recognized success. Mercè is the one who thinks up the plates, which she then consults with her two children who help her in the business, Imma and Joan. She then proposes them to the kitchen team, Ferran Balet and David Sansegundo, who then discuss the plates and incorporate them into the menu.

They have chosen not to enter the game of modern fusion cuisine, creative by obligation, but in this restaurant it is not embraced. Because this is a team driven by sincerity and belief in what it does and the young people that form it, who prefer the kitchen line, for, they have chosen this profession rather than found it, as was once the case. All this goes beyond the cooking and fills the restaurant. A space that has become wider without losing its domestic charm tinted with a tone of relaxation and wellbeing.

It is one of the nicest restaurants in the city. Now it offers the winter menu, full of suggestions, such as mashed potatoes (that taste like potatoes) with goat cheese and slices of truffle, Palamos shrimp with crispy leeks, suckling pig, wild boar, stuffed pularda of apples, foie gras and truffles; roast pigeon and rich desserts, innovative and traditional like the smooth crema catalana, the “mató” with honey ice cream or rum baba. The wine menu offers a sufficient connection of D.O. with its most representative products. It does not avoid the new features, but lacks foreign wines, with the exception of champagne. Rich bread, freshly baked. Years pass and do so with glory in this quiet restaurant, where talking, thinking and enjoying a good meal still remain the refuge of people with taste.

WE RECOMMEND THE TERRACE, a small interior patio that provides a lot of light to the dining room and closest tables, the best in winter. Autumn covers the floor with fallen leaves in a stamp of decadent beauty. THE RICES Mercè Navarro began in her house with the rice, whose cooking point and flavor she knows well and masters. The “sea cucumber” and artichokes rice is outstanding. MACARONI on Mondays and the grandfather’s canellonis, when they’re available A few steps from the restaurant await two of the three charismatic passages of Barcelona: Rambla Catalunya and Paseo de Gracia, where among other wonders we recommend the Casa Mila, with its “golfas” by Gaudí and the Vinçon house with its charming offers ( 20 April to 21 May) 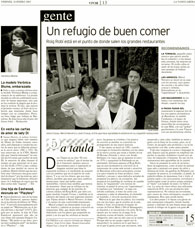